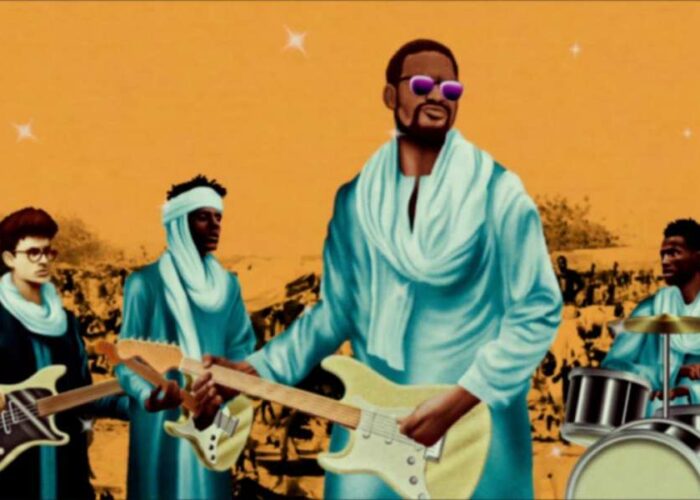 Live music began to ebb in 2021. And recorded music continued to do what it did before the pandemic, but with a slightly different vibe. Maybe it was me, maybe it was the artists, but the music that touched me over the past year was largely music created by people with an environmental focus. – whether this environment is the setting for a story song or for instrumental music evoking a distant space.

Balmorhea is an instrumental duo from Austin, with Rob Lowe, left, and Michael A. Muller.

1. Balmorhea, “The Wind”: I feel like I have taken up residence in this album rather than listening to it. “The Wind” creates or evokes open spaces, with comfortable silences in which a spare acoustic instrumentation nestles. The Austin-based duo defy easy categorical description. I would invite anyone interested in evocative, thoughtful and beautiful music to look into it.

Jazz pianist James Francies – native of Houston and alumnus of the High School for the Performing and Visual Arts – released Purest Form in 2021.

2. James Francies, “The Purest Form”: Francies, from Houston, gave a review by naming her debut album “Flight”. The title of his second album implies a kind of scientific inquiry. In reality, “Form” is an even more exploratory record, on which Francies uses jazz as a base of operations to explore all kinds of musical forms to touch on love, loss and place. On paper, the album sounds scattered, but Francies keeps a firm grip on its stylistic flights.

3. James McMurtry, “Horses and Dogs”: Our idiotic culture has for more than half a century privileged the notion of young musical genius. And James McMurtry wrote lasting songs in his twenties. But at 59, he reached the songwriter version of a Takumi master. These songs have to stretch their stitches with all the data and detail that it includes, it somehow flows effortlessly over three and four minutes.

4. Valerie June, “The Moon and the Stars”: I saw June close a noisy room with just voice and banjo. Others can do it. Not many others. But others. But I was wondering where she would go after a few albums. On this fifth album, she aggressively enters a new space. Those sent to him early will not be pushed back. But here, she goes into kaleidoscopic folk-pop-soul mode, and the results are magical.

NORTHBEACH / C / 26JUL98 / DD / RW Saxophonist Pharoah Sanders, who performed with the legendary John Coltrane in the late 1950s until his death in 1967, played his distinctive sounds during the fourth edition of North Beach Jazz Festival in the parking lot of the Coit Tower. BY ROBIN WEINER / THE CHRONICLE ALSO AVAILABLE: 03/09/2001 ALSO Ran on: 10/14/2007

5. Floating Points, Pharoah Sanders and the London Symphony Orchestra :, “Promises” Probably the most unusual collaboration of the year: a British electronic producer, a free jazz saxophonist bathed in the blues of Arkansas and an orchestra. Each contributor adds something great: Sam Shepherd creates a cold and charming space; Sanders brings reed seed; and the orchestra adds touches of almost ostentatious decor. On paper, it’s a sure-fire failure. On record, he overturns decades of popular jazz myth in crossover contexts.

6. Cassandra Jenkins, “An Insight into Phenomenal Nature”: Put simply, Jenkins offered me the first line of the album: “I’m a three-legged dog, I work with what I have.” . . “The comfort and silence of this album means its charms are only unlocked for those who really come close. I can’t say if it’s weird folk or weird folk, but its elusive character makes it alluring. I keep coming back to it, not because he beckons to me but because he whispers to me.

7. Bottom, “Hey what”: Low has been making albums for almost 30 years, which is a period of time that turns some indie rock bands into mainstream rock bands while leaving a lot of them in the boneyard or trying to replicate early hits. But the husbands of Alan Sparhawk and Mimi Parker have made their own way, shedding skins every few years along the way. Recently, Low’s sound has taken a stormy, electronic turn with their ghostly harmonies like constant magnetic north connecting the present to the past. “Hey What” is the sound of a veteran act that makes music that sounds sad, indignant and restless and also vital.

Mdou Moctar will perform at State House in New Haven on June 28.

8. Mdou Moctar, “Africa Victim”: We are 20 years after the first album released by Tinariwen, and 45 years after Ali Farka Touré released a recording in the United States. So we have well passed the stage of exoticism with the magnificent blues-connected sounds coming from North Africa. What attracted me again and again to this one? The breadth of tones and tempos, and an expressiveness that sprang from the guitar playing and vocals of Moctar.

9. Marisa Anderson and William Tyler, “Lost Futures”: On paper, nothing seems strange about this duet of two exploratory guitarists who bring John Fahey’s “primitive American” sound well into the 21st century. That said, although the two have collaborated before, each has made a name for themselves for their rather insular instrumental recordings. But “Lost Futures” turns out to be a beautiful collaborative effort, a musical conversation in which the two invite listeners who can enjoy such sound without outside distractions.

10. The War on Drugs, “I don’t live here anymore”: I played this one, ranked it, and forgot about it. My mistake. Admittedly, the fifth album of Adam Granduciel of rock roots, slightly synthesized does not take you by the shoulders from the start. Instead, it slips into its groove. And the album unfolds subtly from there, with the same old perfectionism of little details, only presented with a more nuanced sense of craftsmanship when it comes to songwriting. The lyrics are less cryptic and more direct, and the songs move around more, for an enchanting effect. This album, to his credit, is not a sprint. It is a personal and family road trip.

I try not to place reissues or new releases of old music on such lists. They represent a very specific mix of arts and crafts – old works of creative types discovered and diligently presented as new rather than contemporary recordings – that differ from new recordings which represent a current time and place. With that in mind, two recordings that have held my attention for long periods of time this year were both recorded in the 1960s in Seattle. Bola Sete’s “Samba in Seattle” captures the brilliant Brazilian guitarist with his trio – bassist Sebastiao Neto and drummer Paulinho Magalhaes – recorded in 1966, 1967 and 1968.

John Coltrane’s “A Love Supreme: Live in Seattle” is the revelation that an Antibes live bonus record in the 2002 reissue of “A Love Supreme” was almost. The Seattle show – recorded three months later than Antibes – finds Coltrane with Pharoah Sanders and Carlos Ward joining him on saxophone rather than Archie Shepp. But more than the programming, the approach to the music is thrilling, as Coltrane’s septet almost doubles the length of its masterpiece in a fiery and sought-after performance.