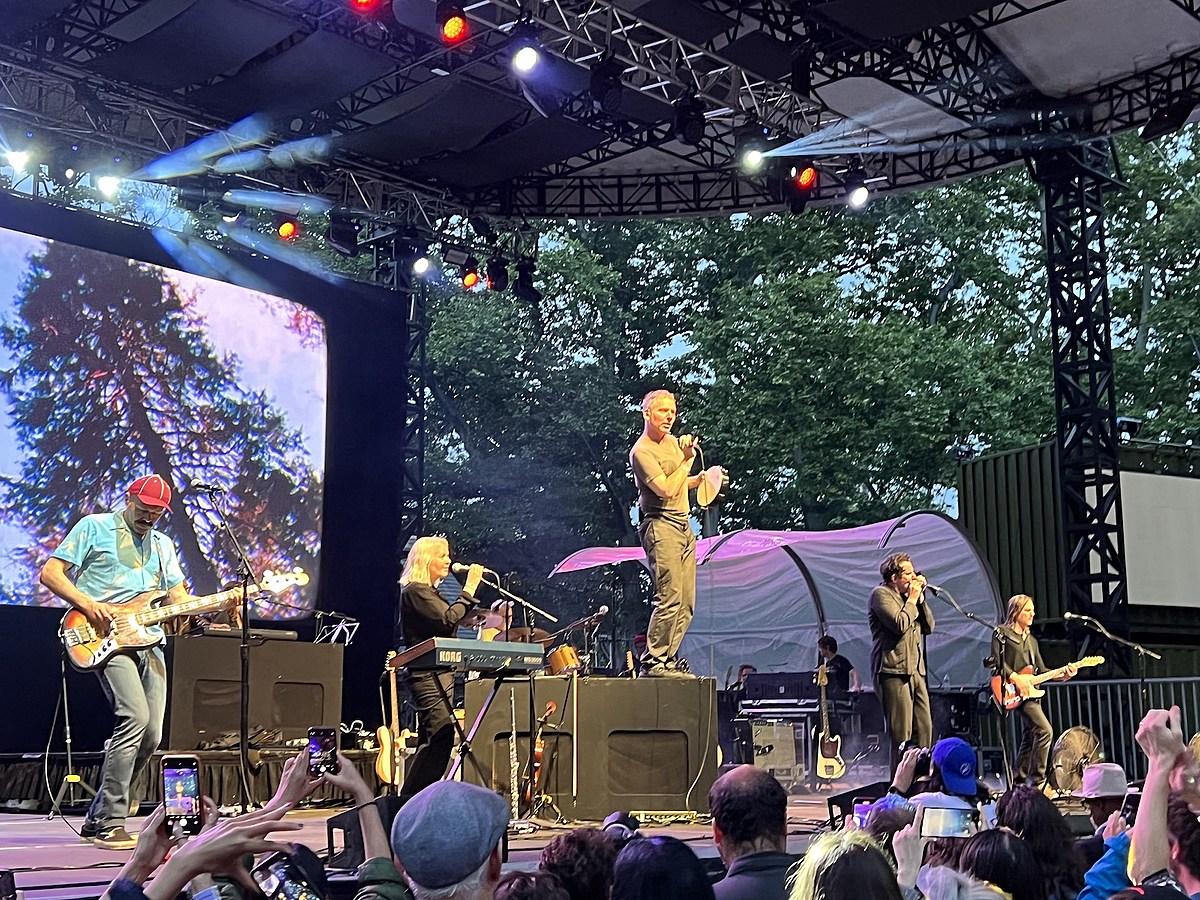 “Feels like Glasgow here!” Stuart Murdoch commented on how chilly Thursday night was in Central Park, compared to the nearly 100-degree weather they had just emerged from in the DC area the day before. There had been threats of rain earlier in the day but it was a really perfect night in the park which is a perfect setting for a nice crowd Belle and Sebastian show like this.

Even though the band just released their best album in a while… A bit of precedent – and four songs from it played, the SummerStage show felt like a hitfest with classics arriving early and throughout, including “The Boy with the Arab Strap” (which for years was their show-closer) , “She’s Losing It”, “Sleep 24 hours a day”, “I’m a cuckoo” and much more.

It was also quite a high-tech tour for a band that likes to be free, with movies for almost every song they played. Some of them were the music videos for the songs, but others seemed purpose-built, like the Olympic montage used in “The Stars of Track and Field.” That didn’t stop them from turning things around, however. “We just made a decision between two songs, but you’ll never know which one we didn’t choose,” Murdoch teased, but when the audience jeered in disapproval, he only played. a snippet from the loser, “String Bean Jean”, before the band launched into “Judy and the Dream of Horses”, which I thought was the best choice.

The band also played for the crowd and the city, delivering a trilogy of New York songs: “Piazza, New York Catcher”, Stevie Jackson’s “Chickfactor” (about their first visit to New York) and “Working Boy in New York”. York City” which is taken from the new album.

The main set ended with “Wrong Girl” (from Cross your hands child, you walk like a peasant) and “Sleep 24 hours a day”. For the encore, Murdoch asked the audience for requests. “It’s our number one most requested song,” he said of “You’re Cover’s Blown,” adding, “But we never figured out how to play it.” It’s not true, it was a regular on the setlist in 2006 but it’s one of their most complicated songs — Stevie Jackson got into the disco riff and Stuart sang the first verse and chorus. but they gave up after that. “Okay, what’s your second most requested song?” It would be “There’s Too Much Love” which they also played for a bit before ending the night with “Get Me Away From Here, I’m Dying” which had the whole crowd singing and then hopping” We Are the Sleepyheads” to close the evening.

The setlist and video for “Get Me Away from Here I’m Dying” is below.

Los Bitchos opened the show with a fun set of their instrumental rock that draws from around the world – Tuareg guitar styles and Highlife rhythms, cumbia, surf-rock, Greek disco, spaghetti western scores, and more. Before performing “Lindsay Goes to Mykonos”, they asked if Lindsay Lohan (who the song is about) could actually be in the crowd and if so, would she like to get on stage and dance? If she was there, she didn’t say so. The band also noted that they will be playing a headlining show at Music Hall in Williamsburg on Monday (6/20).

SETLIST: Belle & Sebastian @ SummerStage in Central Park 06/16/2022
nobody’s empire
i am a cuckoo
unnecessary drama
Talk to me, talk to me
She loses it
The Boy with the Arabic Bracelet
Dear disaster waitress

Bis:
Your Cover’s Blown (partial, request for hearing)
There’s too much love (partial, audience request)
Get me away from here, I’m dying
We are the sleepy ones