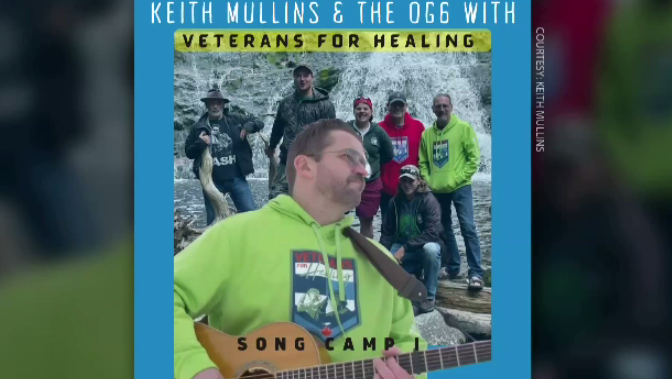 In honor of Monday marking the 78th anniversary of D-Day, a team of veterans wrote and released a song for fellow veterans.

“We wrote this song as a tribute to veterans who risked their lives for everyone,” said Keith Mullins, songwriter and producer at Barn Bhreagh Studios in Baddeck, Nova Scotia.

The song is called Renegades and is part of an album written with veterans, for veterans.

Six men and women from across Canada who served in the military participated in the project.

“I meet one vet at a time, and they tell me their story,” Mullins explained. “This song I posted on YouTube, Renegades, was written with Sindy Maysfield. She was removing a bomb in Afghanistan.”

Fabian Henry helps lead the Veterans for Healing group. He says for himself, and for the six others who contributed to these songs, that it was about honoring the sacrifices made on June 6, 1944 – while meeting the needs of veterans today.

“It’s special to us. You know, ‘We will remember them’ is a slogan we all use in the military,” Henry said. “For those who actually fought the Taliban and other wars, not just in Afghanistan – yes, they all hit home. The six songs are going to hit you hard.”

Veterans reunited in August 2021 for a singing camp retreat in Cape Breton. From there, the songs were written in just a few days.

Henry says in August they’ll be back to do it again.

“To see the transformation of these individuals through song alone is beautiful,” he said.

Mullins says 50% of the proceeds from the album will go to Veterans for Healing.

However, for the veterans themselves, there is an added benefit every time someone listens.

“We don’t have to keep telling our story over and over. You can kind of hear it through the music now,” Henry said.

The album can only be found on Mullins website.

2022-06-06
Previous Post: Rich Fayden on helping new artists launch their careers in the music industry
Next Post: Aparshakti Khurana: I see myself taking more opportunities to sing in playback