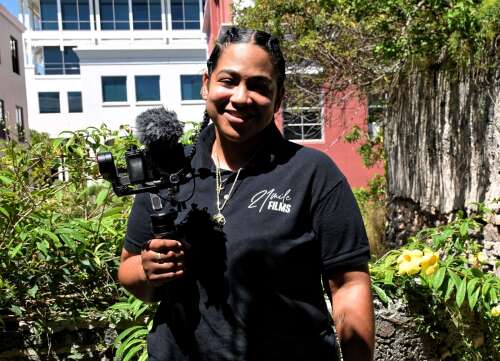 Deesa is the glue behind the scenes – The Royal Gazette

Instead, she nurtures her passion by making videos for other artists.

“They’re so much fun,” the 21 Mile Films owner said. “Music videos are my way of connecting with music and telling the story of everything I listen to.”

She has also released music videos for local artists such as Yanni Michael and Trey “One They Watch” Simons.

“Trey is a really passionate artist,” she said. “We did a few projects together.”

Rising to the challenge: Deesa Booth is making a name for herself in videography (Photograph by Jessie Moniz Hardy)

When she works with an artist more than once, she likes to see progress from both sides.

She has created music videos in a variety of styles, including dancehall, rap, and gospel, but rap is her favorite.

“I like the fast pace,” she said. “I like any upbeat song where I can do a lot of special effects. With slower songs, I can’t really do all the effects and all the stuff that I would like to do.

She taught herself a lot of effects that she uses thanks to “YouTube University”.

“If I see something in a video, I’ll go to YouTube and try to type in different things,” she said. “YouTube has 70 million videos of how to do something. If one video doesn’t explain it well enough, I find a simpler version.

“With editing, once you’ve completed the simple version, you can always make it more advanced yourself.”

For Ms. Booth, the hardest thing about making music videos is putting it all together.

“The artist comes with his own ideas,” she said. “Sometimes I will give my opinion and see if I can take them in a different direction.

“It’s just about communicating with the artist and figuring out how we can create their vision.”

She’s been in the business since graduating from Full Sail University in Winter Park, Fla., at age 19, but she’s still nervous to show her work to the world.

“I work really hard on all of my videos,” she said. “But sometimes when I’ve tried something new or something out of my norm, I get nervous and wonder if people are going to like it.”

But she generally gets good feedback. “People want to see change and growth,” Ms Booth said.

She returned to Bermuda in 2019 after working in Atlanta, Georgia for several years. Having not lived in Bermuda since she was 17, she was unsure about resettlement.

She spent her first few months in Bermuda filming occasionally and developing her social networks.

She officially launched 21 Mile Films in November 2019 directing not only music videos but also doing photography, commercials and event recordings.

But the pandemic had an unexpected silver lining, a massive increase in virtuality.

“It opened a lot of doors for videographers,” Ms Booth said.

When get-togethers were allowed again, in limited numbers, many people were determined to create memories of their events, even if it was a corporate meeting.

“The world is going in such a crazy direction that you never know what can happen,” she said. “So people said they just wanted to have some videos to remember the occasion, even in the corporate world.

“People are also doing more live streaming. I got into it a year ago. »

Throughout middle school and high school, she was involved in acting.

At the Berkeley Institute, she was part of a theatrical group called the Berkeley Players. But she found she enjoyed helping out backstage or stage management the most.

“I loved being the glue behind the scenes,” she said. “I enjoyed helping the show come together.”

In 2012, she entered an accelerated undergraduate program at Full Sail University to study film and videography.

“I wanted to work in television,” she said. “I wanted to be a cameraman, or just be on set somehow. Then I started doing my own things.

While in college, her university had cameras she could use for her projects.

When she graduated, her mother helped her buy her first real camera, a Cannon EOS 7D.

“I was ecstatic about it,” she said. “It was my first baby. I was filming and taking pictures for fun. I learned a lot with it.”

Today she works with a Sony Alpha 6300 mirrorless.

“It gives a better look than my Cannon used to,” she said.

The hardest thing about running 21 Mile Films is working alone.

“I have to be all the hats of a company when it comes to emailing and bookkeeping, and filming and editing,” she said. “I’m hoping to be able to hire people in the next two years so I can build and get bigger and focus more on the creative side of things.”

Looking back at her career so far, she’s most proud of a project she’s worked on called Bigger Than 21.

“The project was to try and give Bermudian artists and business owners an advertisement or product that looked like it was from overseas,” she said. “The ads are super high quality and super creative.