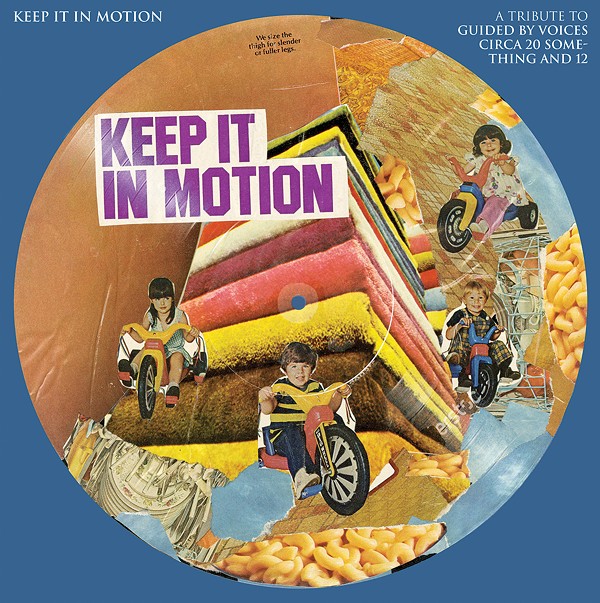 By: Latoya J. Goad
In: Music albums
Click to enlarge

The Guid by Voices tribute album Keep It in Motion features several St. Louis bands and was engineered and compiled by Matt Harnish of Bunnygrunt.

Although indie band Guided By Voices began as a chaotic bar band, over the years they have grown into one of the tightest and fiercest live bands in the country. It is also one of the most prolific and varied in its styles.

Robert Pollard and his changing circle of musicians have released over 30 albums since forming in 1983. Some say that when you count all of his solo records and side projects, he’s written over 2,400 songs. The band’s other songwriter, Tobin Sprout, has contributed to the discography of beautiful, eccentric, folk-tinged songs. There are different incarnations of the group. Some records are lo-fi, others more polished.

You can locate Guided by Voices fans in the heights of Hollywood and Washington, DC. You can find them in music clubs in America and Europe. As you can imagine, there are dedicated Guided By Voice fans here in St. Louis, especially among the indie rock artists in our beautiful city.

It’s an effort that couldn’t have found a better audience than with me.

End of June in the year of our Lord 1994. I returned to the Midwestern college town where I attended graduate school. I’ve only been away for a year, but it’s essential that I stop by the three record stores on the pedestrian street and ask the savvy salespeople what new music interests them.

One of them hands me thousand bees by Guided by Voices. I don’t even know where to start, he said.

Coming back to St. Louis, I’m slipping thousand bees in my disk drive. With the first two tracks, I wonder if this album might not have been recorded in the toilets of a laundromat. Are the songs supposed to be so… brief? Besides, are these guys still learning to play their instruments?

Then tracks three, four and five (“Tractor Rape Chain”, “The Goldheart Mountaintop Queen Directory”, “Hot Freaks”). I listen, leave and re-listen to these same three. A dawning awareness. Then a realization.

It’s not just that this band from Dayton, Ohio plays music born out of the British invasion. It’s that they took the music of British Invasion and turned it into their own sprawling carnival. More importantly, the carnival is haunted in beautiful and eerie ways. Other tracks on thousand bees conclusively prove that, even with the lo-fi production, this band is seriously awesome.

Listen Keep it moving – so named for a 2012 single – within a matter of weeks I was back to something of my original conversion. I can happily say that it also really rips.

The album was engineered and compiled by Matt Harnish of Bunnygrunt, who focused on 2012 as a particularly rich year for Guided By Voices – a year when the band’s two songwriters, Pollard and Sprout, reunited at new and original players reunited. That year, Guided By Voices released three albums featuring some of the band’s best and perhaps most overlooked songs.

Harnish understood, wisely, that it was better to present works from this era of the Guided By Voices catalog than to try to cover classic albums, an undertaking that ultimately would not have satisfied anyone. He sent invitations to artists who shared his deep love for Guided By Voices. Once a group said yes, he encouraged them to choose which song to cover.

The result is a rich and dynamic collection. I was struck by Sleepy Kitty’s soaring, Lennon-esque version of “Blue Babbleships Bay” and Good Grief’s slick, pounding, melodic cover of “Doughnut For A Snowman/Chocolate Boy.” Many artists channel the sacred sound of Guided By Voices, while other artists – such as Franklin Bruno, bLUSH and Charity Cult – indulge in synthetic and satisfying reinterpretations. Bunnygrunt offers a nimble and catchy version of Tobin Sprout’s “The Corners Are Glowing”. Let’s not forget that a Guided By Voices cover album should also be rowdy and fun. To that end, we get animated covers of Trauma Harness and the aptly named She Bee Vee.

Keep it moving has a knockout album cover by visual artist Jeff Hess. One of the added joys of the Guided By Voices albums is the artwork created by Robert Pollard, which takes the form of psychedelic collages. by Hess Keep it moving The blanket combines the iconic Ferris wheels and folded linen to great effect. The 12-inch vinyl comes with six additional collage covers from passionate visual artists from Guided By Voices as near as St. Louis and as far away as Peru.

Both in art and in music, Keep it moving is a celebration – made by passionate fans and sent out into the world to find other passionate fans. It’s only fitting that the album was born in St. Louis. Many of Guided By Voices’ best-known early albums come from Scat Records located in our town. There’s a spirit in these Scat records that finds its way onto Keep it moving: a willingness to strut on stage, wearing the psychedelic wardrobe, doing all the grand gestures of British rock and roll Invasion. In short, living the one true dream.

Keep It in Motion: A Tribute to Guided By Voices Circa 20 Something and 12 is available for download and vinyl pre-order at band camp.