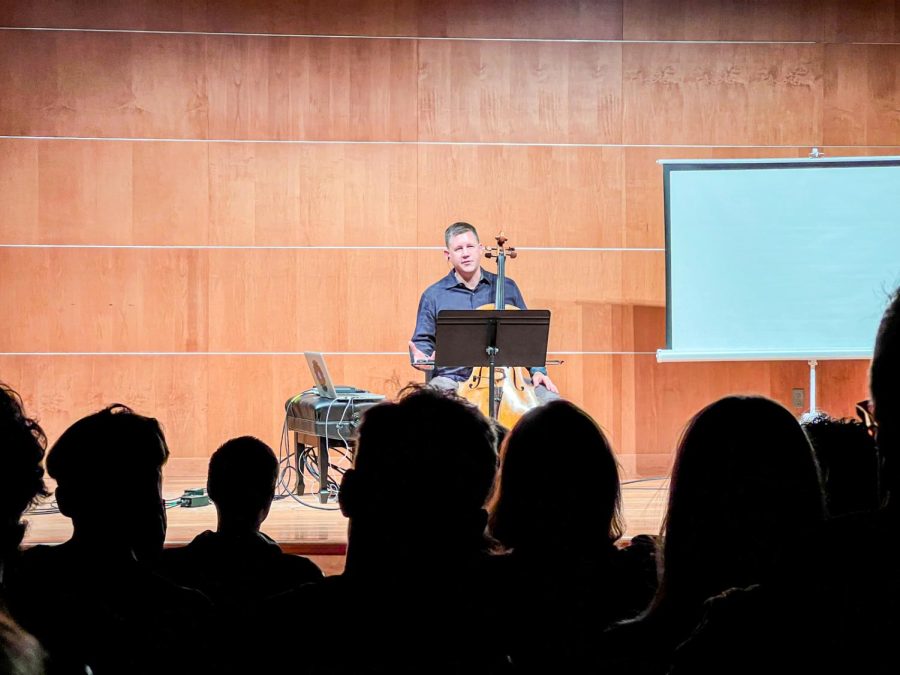 The event was part of Photinos’ week-long residency at GVSU in the Department of Music, Theater and Dance. This was the 48th show in the Free Play series and it runs about two to three times a year. The event aims to bring new music and artists to the public and students.

“I aim for people to enjoy the music and carefully select repertoire that creates a good concert flow,” Photinos said.

Free Play Events are a long series of music events hosted by GVSU faculty. For his set, Photinos interpreted his own pieces entirely composed of cello and electronics. He performed a work with six students from GVSU’s New Music Ensemble.

Free Play producer Bill Ryan founded the program in 2005. His role is to book guest artists and organize events when that guest visits.

Ryan was delighted to invite Photinos, a familiar acquaintance. The two know each other’s work very well, having worked together in the past. Photinos also has a history with the GVSU community.

“This is her third visit to campus to work with our students,” Ryan said.

Photinos’ musical career began to develop at a young age and he ended up playing the cello after first experimenting with other instruments.

“I originally wanted to start playing the violin at age six, but the first time I put one under my chin it hurt a lot,” Photinos said. “So they gave me a cello and I felt like home. I play electric bass – and very occasionally – acoustic bass.

Photinos originally visited GVSU with the musical group Eighth Blackbird, a group he played with for 24 years. It wasn’t until 2017 that he started touring as a soloist.

“I first came here in 2017 and working with Bill’s students is always a joy, so I know it will be a great experience,” Photinos said.

Additionally, Photinos is part of CelloFest, works with student composers and performers, and performs at multiple venues on and off campus. He said he was “extremely honored” to be part of this program.