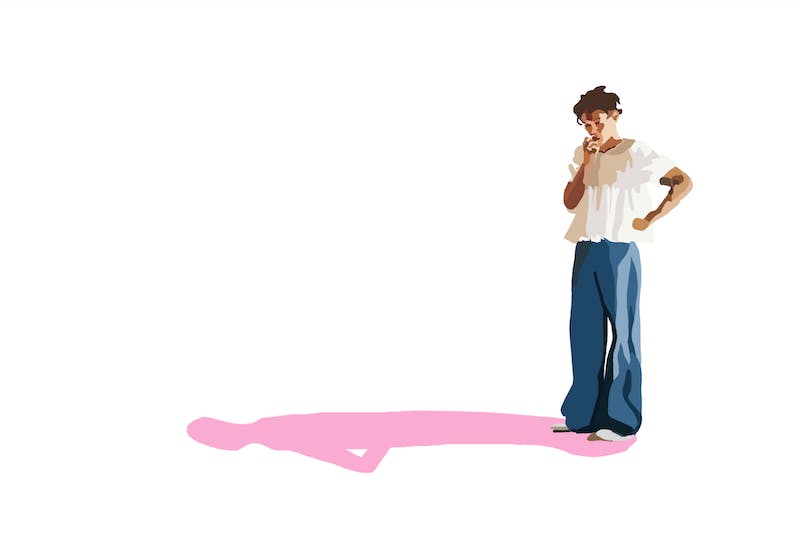 ‘Harry’s House’ is an intimate diversion from Styles’ previous work


Coming back from New York the morning of the album’s release, “Harry’s House” was the soundtrack for my return to campus. With nothing but long highways and sleeping passengers – coupled with Waze occasionally interrupting Harry Styles’ sweet crooning – I was able to give this album the attention it deserved, which made me appreciate it so much its many nuances and subtleties.

“Harry’s House” was released on May 20 after its unexpected announcement on March 23. After the release of single “As It Was”, it was abundantly clear that this album would be a diversion from his previous albums – his 2017 self-titled debut and 2019’s “Fine Line” – but I was still shocked by the brand new sound. The perfect summer album, its dreamy, ethereal sound masks a mix of sexually charged choruses or dark lyrics. “Harry’s House” is a perfect continuation of the image and attitude he spent years carving out, demonstrating not only his musical talent but his ability to adapt to audience desires while maintaining his individuality.

Aptly titled “Harry’s House”, the entire album makes the listener feel like a guest inside Styles’ mind. The album isn’t as radio-friendly as his past work and strays from the stereotypical pop formula, but Styles has achieved such fame and notoriety that he’s no longer beholden to the procedural songwriting that taints much of modern music. This album exudes the easy charisma associated with the styles, creating an enjoyable listen that scratches the aesthetic itch in my brain. This kind of sound isn’t groundbreaking – every indie band has attempted something similar at some point in their career – but with a funky sound and pseudo-rock attitude, ‘Harry’s House’ does it better.

Beginning the album, it is “Music for a Sushi Restaurant” which immediately sets the tone with an electronic sound and vocals used as instruments. Repetitive horns and a jazzy bass sound immediately draw the listener into the mood of the album. The song continues Styles’ trend of food-related innuendo, singing “Green eyes, fried rice / I could cook you an egg” which is followed by “you’re sweet ice cream / But you could use a flake or two / Blue gum wrapped around your tongue It’s a fun and charismatic introduction to the album that perfectly captures the attitude of this new era.

“Late Night Talking” and “Cinema” continue this upbeat trend with a groovy style and positive sound, with a loose, relaxed attitude that makes listening easy. The lyrics – cute, airy and romantic – are somehow incredibly personal, as the listener feels part of the intimacy of Styles’ bedroom. He’s not shy about divulging the little details of his life, singing in “Cinema” that “you got, you got cinema (Cinema) / I bring pop to cinema / You pop when we get intimate.” The lead single “As It Was” was made for radio play; it’s an easy song to love and perfect for sunset strolls and days by the river. These songs are harmless – bordering on safe – but enjoyable to listen to nonetheless.

My love for “Harry’s House” blossomed after listening to “Matilda”, and only grew after that. “Matilda” is a particularly powerful song; anyone in a tumultuous relationship can understand the heartache of breaking up. A truly beautiful ballad, Styles whispers in listeners’ ears that “you can let it go / You can throw a party with everyone you know / And not invite your family ’cause they never showed you love / You don’t you don’t have to be sorry to leave and grow up. There’s something naturally reassuring about the comfort Styles provides, being told that “you don’t have to be sorry” and “you don’t need to ‘a reason’. Whether it’s hurt by family, friends or a partner, Styles’ song sounds like he’s pulling you into a hug and telling you it’ll be alright – something we’re never told. not always say enough.

My favorite songs from the album are “Keep Driving” and “Love of My Life”, for very different reasons. “Love of My Life” – the final song on the album – sounds like the kind of affection you dream of all your life, the kind of love that transcends place, time or situation but still exists in your heart. . While Styles claims the song is about his birthplace in England, when he sings “Baby, you were the love of my life, woah/Maybe you don’t know what’s lost til you find it / That’s not what I wanted, leave you behind / I don’t know where you’ll land when you fly”, this song could be about whatever the listener wants it to be. something beautiful in the ambiguity of this album: each song can be transformed into whatever the listener needs to hear, whatever their heart makes it even more enjoyable to enjoy.

“Keep Driving” is a song of juxtapositions. Quickly listing the different parts of her life, Styles maintains the sexual nature of the album singing “Cocaine, side boob/Choke her, with a sea view/Toothache, bad move/Just act normal” but the chorus that precedes it” there’s no more worries without the engine noises/We held back the darkness and we held back the clouds/I’d ask, ‘Should we just keep driving?’ creates contrast. The juxtaposition between the risque lyrics and wholesome chorus creates a tangible distinction the listener can grasp. As Styles sings about the distractions and pleasures of his life, the repetition of “should we just keep driving proves the comfortable monotony of the passage of time; no matter what surrounds us, life goes on. With college already seeming to be slipping from my fingers and my future looming, “Keep Driving” is a welcome realization felt by many. the same thing as me.

“Harry’s House” is not a groundbreaking album: similar styles have been attempted and succeeded before, but Styles does so with a charisma and shrewd flamboyance that makes this album something special to behold. With masterful lyricism and a funky sound, the album is the perfect soundtrack for the coming summer and will be the background music for many of my upcoming adventures. While the first listen may sound like a young man in love, the underlying nuances and raw emotion of “Harry’s House” make for a powerfully intimate album that comforts the listener no matter the difficulties. with which we are faced.