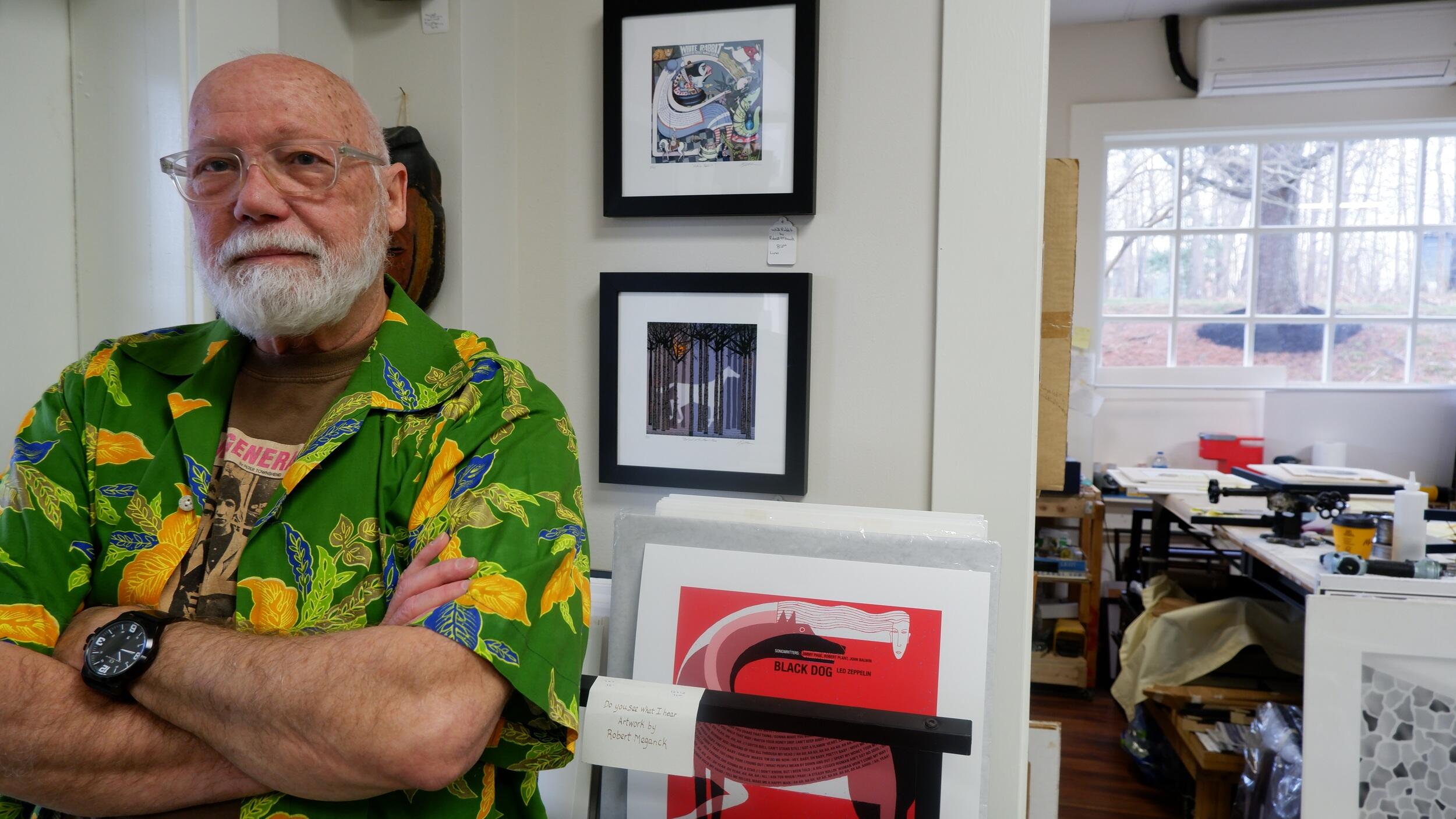 Lockdown didn’t stop Robert Meganck and other artists like him, it just forced them to find a different path – VCU News

Reese Witherspoon took up painting. Tony Hawk sang Nirvana with Mikey and his Uke. Robert Meganck illustrated the songs he heard. When the world went into lockdown, artists of all genres couldn’t stop creating, even as they had to find new ways to do it.

“When you put a creative person in a box, they’ll look for a way out,” said Meganck, professor emeritus in the Department of Communication Arts at Virginia Commonwealth University, where he taught for 40 years. “The pandemic has nearly eliminated my freelance illustration projects, but eliminating outside projects doesn’t change the internal drive to create something, it just forces you to find a different path.”

Meganck’s journey led him to create “see what i hear– a series of picture songs – and won him national recognition with an industry award for music-inspired art.

His visual rendition of Led Zeppelin’s “Black Dog” won communication arts 63rd Annual Magazine Illustration Contest. Out of 3,689 entries, 145 illustrations were selected. The magazine will publish the article in its May/June issue.

A piece inspired by Lead Belly’s “In the Pines” has been recognized for its excellence by American illustration and will be included in its annual AI-40, which represents the best illustrations of the year.

It all started with the death of folk singer/songwriter John Prine in April 2020.

“I’ve been a huge fan of John’s music since his cafe days in 1971,” Meganck said. “I love all of his albums and wondered how to deal with the fact that there would be no more. I wrote a little article to send to friends who talked about the content of his songs, the beauty description of his words and what they mean to me.

Meganck found himself copying the lyrics to ‘Hello in There,’ a Prine song about old age loneliness, and pasted them onto a 12-inch-by-12-inch page, the size of an album cover. . He digitally painted an image that represented the lyrics above the text. The job, he said, gave him a certain level of closure.

A few days later, he was listening to an album by Leonard Cohen – another favorite – when he thought about how he would illustrate the song “Ballad of an Absent Mare”. Friends and family seemed to enjoy his renditions of songs, so he followed up with song illustrations by Paul SimonJohn Lennon and Paul McCartney, and Mick Jagger and Keith Richards.

It was then that he realized the project was a fulfilling way to stay creatively active during the pandemic. Two years – and 110 illustrations – later, he still releases a song every week.

“No one thought the pandemic would still affect our lives two years later,” he said. “It sort of evolved into a series.”

Change is part of the creative process

Meganck approaches each track by listening to the song, examining the lyrics and exploring its meaning.

“The road to the finish can take twists and turns, and the final can be very different from the initial idea,” he said. “Allowing yourself to change is part of the creative process.”

Although he still plays music when he works, it’s “not the same song over and over,” he said. “At first, I usually listen to albums by the same performer, but I also switch to others.”

He chooses songs from a variety of genres – including rock, country, folk, punk and blues – from his own collection of CDs and vinyl, iMusic and streaming services. Everything is done digitally. Most start as sketches on an iPad, but all are finished using a combination of Adobe Photoshop and Illustrator. After finding the initial concept, it takes one to three days to complete the illustration.

“The series is called ‘See What I Hear,’ because they are visualizations of what I listen to and love,” Meganck said. “Four of the songs started with commissions, but before accepting each one I had to listen to them several times, read and understand the lyrics. Before accepting the commission, I had to believe that I could perform them. properly. I also get song suggestions from friends and family. My daughter, a VCU graduate, is keen to let me know what songs she would like me to do. It should also be noted that four of the songs are instrumentals, so I had to take inspiration from the title and tone of those songs.

“The arts make your life worth living”

It’s hard for Meganck to say what he would do if the pandemic hadn’t forced him to reassess his timeout.

“Music is my muse,” he says. “For someone like me, who loves live performances, [this project] was a way for me to express my love of music without the option of location.

And, he thought, what could be better than spending most of your day drawing? “I can’t imagine doing anything else.”

The truth is, Meganck added, he’s an artist not because he’s so good at it, but because growing up he was so bad at everything else and never really wanted to do something else.

“The arts won’t save your life, but they will make your life worth living. If you think of life without visual arts, performing arts and literature, what would make it meaningful?

The “Collection “See what I hear” can be viewed and purchased online at Saatchi Art. Some pieces are on display and for sale at the Collector’s Gallery at 13228 Midlothian Turnpike, Midlothian, Virginia.

Subscribe to VCU news at newsletter.vcu.edu and get curated stories, videos, photos, news clips and event listings delivered to your inbox.