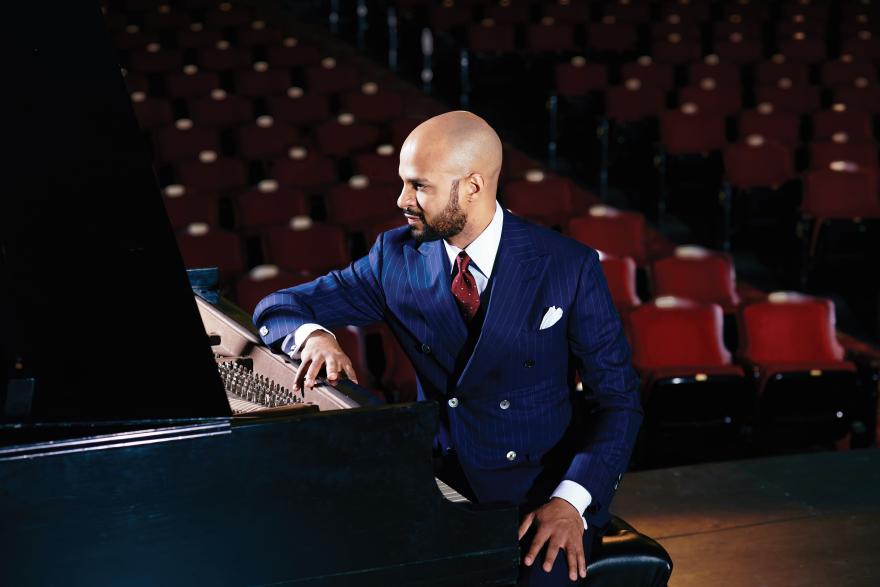 baron ryanan astoundingly talented pianist and composer, is perhaps the most perfect person ever chosen to play in “hipstoric” Blackhawk Hotel in downtown Davenport.

The son of two musicians (including his father, professional pianist Donald), he grew up in an Oklahoma home filled with the sounds of artists ranging from Mozart to Michael Jackson. Now 34, he’s not content to tap into just one influence. He combines them all in a musical adventure that his biography calls “vintage but fresh, historic but trendy, classic but cool”.

Ryan is the current Quad City Arts Guest Artist, and he will perform a free “pop-up” concert Friday at 5 p.m. in the posh lobby of the Blackhawk Hotel, 200 E. 3rd St, Davenport. He and his father will perform an official “Going Gershwin” concert Saturday at 7 p.m. at Geneseo High School, 700 N. State St.

You can get tickets for it ($20 for adults or $5 for students) by visiting HERE.

After beginning piano lessons in Tulsa at age four with his father, Barron seemed destined for a career in music. He was a piano student at the University of Oklahoma.

Ryan was then kicked out of every music conservatory that might impress you. Discouraged, he briefly gave up the piano to pursue a satirical hip-hop career. But due to a favorable result in a piano competition that sent its winner to perform in Israel, that project was short-lived.

In 2019, Ryan noticed a shocking lack of funk, pop and country-inspired classical music, according to his biography. Realizing he could fill this void, he composed the “Magic City” Sonata and a dance suite titled next thing. These works are now published and recorded on his third solo disc, First of its kind.

In 2021, he added “commissioned composer” to his growing list of accolades. Commissioned by Chamber Music Tulsa to produce a work commemorating the 1921 Tulsa Race Massacrehe wrote a one-movement piece for piano trio entitled My soul is full of trouble. Smithsonian Magazine even noticed, and named Barron one of the Ten innovators to watch in 2021.

The 1921 massacre was taught in his school growing up, Ryan said Thursday.

“It’s an important event in the history of our city, and it’s not pleasant to remember, but I think it’s a lesson worth passing on in the future, to try to avoid such a catastrophe again,” he said. “Initially I had too big a vision, thinking I wanted to portray the whole event in one piece, but I realized that was too much to try and so I decided to read first-hand accounts of this tragedy and to write music that reflected how I felt, while reading those accounts, and it was a much more manageable task.

Ryan has never done a multi-day residency like Quad City Arts and has found it very enlightening to speak and perform for a wide range of people – from elementary school students to seniors.

“I think music is ambitious at its best, when you listen to it and when you create it,” he said Thursday, “At its best, you feel a sense of wonder. And you feel a feeling of wonder thinking that I didn’t realize such a thing could exist in the world. And so you feel inspired and I hope this inspires you to create that sense of wonder in your own life and in every possible way.

“Most people aren’t musicians that way, but everyone can make the world a better place and make others feel a sense of admiration in one way or another, regardless of what you do,” Ryan said. “Being able to share this and having an organization whose mission is to share gives me hope that there is still beauty and goodness in the world, even if it sometimes takes looking for it.”

In his QC elementary school lectures, Ryan presented what he called “three steps to being amazing at everything. And I use music as an example, but the steps are simple. The first is you start…and the second step is to keep going after you start and learning, keep learning as long as you’re interested in being amazing at whatever it is,” he said.

The third step is to change when you need to, “because sometimes you don’t realize what’s happened,” Ryan said. “But if you can build that into your plan and adjust, you can be in a better position to move forward and continue in the future. And so, I try to keep the music as a way to show that pattern is true. Not just for music, but for anything that might interest students. »

“I believe you can achieve great things and you should chase your dreams, but sometimes your dreams just don’t work out,” Ryan said. “So what are you doing then?” And it’s easy to give up then, but struggle and failure are a part of life, whether it’s what you’re supposed to do or not. You will encounter difficulties. And so, I think managing that is one way we can help better equip students to manage their future.

Like most artists, the 2020-22 pandemic has forced major changes, affecting Ryan dramatically – for starters, he was supposed to visit QC last year.

“So I had to pivot and I was lucky. I was already going to fundraise for an album project that I was going to do,” he said, noting that he had done a lot writing, fundraising and recording, as well as virtual performances, streamed online.

“I may not have had to stock shelves or anything. And I came out of it, on the other side, better than I started,” Ryan said, noting that he recorded and released their third and fourth albums last year, a productive pandemic.

Alumnus of the University of Oklahoma, he recorded both at Oklahoma State University, his school’s rival. It was because their concert hall was available to rent for recording, and the UO’s was not, Ryan said.

He has been writing music for about three years, including recording a sonata filled with pop, funk, soul and country influences.

At ease in classical, transcribing jazz

“Whether it’s my own music or whether it’s Gershwin’s music or jazz transcriptions – replaying my favorite jazz pianist solos – I find my strength in playing them and I find the most pleasure in playing because I am unique in my ability to interpret them,” he said.

In 2017, he spent dozens and dozens of hours transcribing 11 of his jazz favorites – including Oscar Peterson, Art Tatum, Fats Waller and his father, Donald Ryan – then recording them for ‘The Masters’ Apprentice’. .

“What interests me is playing great music and telling a great story,” Barron said. “So I don’t care what category you put it in, as long as I achieve those two goals.”

“I know licks as we call them, which Oscar Peterson and Art Tatum would play, so I can incorporate them and then it was also a good way to practice difficult music without feeling like I was going to be compared to every other classical musician,” he said.

“It was amazing, because I thought – I do with jazz musicians what pianists have done for centuries with classical musicians, which is to follow in their footsteps and learn to play the way they did,” he said. “It was a huge sense of accomplishment and even when I listen to this album, I’m very proud of it.”

It’s also her 3-year-old nephew’s favorite album, partly because it’s upbeat and they like to dance to it, Ryan said.

His performance on Friday will be varied, with an emphasis on his own compositions.

Saturday at Geneseo will be a program for everyone George Gershwin (1898-1937), play with his father. A highlight will be the transcription for two pianos of the immortal “Rhapsody in Blue” which Gershwin wrote in about a month when he was just 25. Its original version was for two pianos, then Ferde Grofe arranged a part for the jazz orchestra when it premiered in February 1924.

“It’s humbling to realize this and have this be such a strong part of his legacy and such an enduring work,” Ryan said of Gershwin’s early life (the composer died of a tumor in his brain at 38).

On Saturday, the father-son duo will also perform a two-piano fantasy based on Gershwin’s 1935 opera, “Porgy and Bess.”

Besides making great music together, what’s it like to both perform on the same stage?

” This is delicious. It’s low stress,” Barrron said. “We have very similar musical tastes as I grew up listening to his favorite playing and recordings… We think a lot alike about the piano. So it’s very fun to be able to play with him.

To hear Ryan and learn more, visit his website.