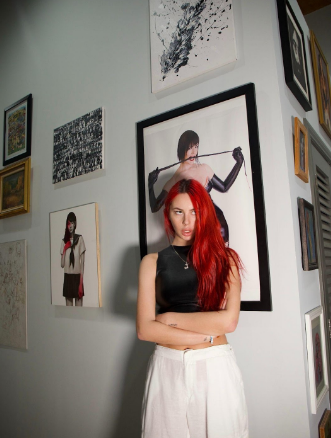 Regardless of the choice, every professional industry is competitive, but none have been as cutthroat as music and entertainment. With thousands, if not millions, of talented people vying for the chance to get noticed, the competition has only intensified with available streaming platforms available to all. Yet despite fierce competition, Jessie Berg managed to break through in 2019.

Like many of his peers, Jessie Berg grew up with a fondness for music. While growing up in Los Angeles’ San Fernando Valley, she first introduced her talent to her grandmother by singing in the car. Validated by her family’s praise, Jessie fell deeper in love with music. Since that fateful day, she has taken every opportunity she could to learn more about her gift, study voice, participate in choirs and perform in musicals.

Citing Amy Winehouse as her favorite artist growing up, Jessie would later delve into the entertainment industry after graduating from high school. Her first adventure was in her cousin’s recording studio, where she spent her free time writing and recording her music. At the same time, Jessie worked as an intern for FLAUNT Magazine.

In 2019, Jessie Berg finally showed up with “Monster.” Her first single generated thousands of streams, and the media praised her. “Jessie Berg is a true role model for feeling able to talk about real issues, feelings, and ideas with confidence,” wrote The Hype Magazine.

Although she didn’t release anything in 2020, Jessie spent the year polishing her craft so that listeners get the quality they expect from her. Working with producers Jordan Omley and Mike Summers, she carefully honed her vision.

“We don’t think about anything,” said the artist. “The songs came out immediately. We were all on the same page in terms of writing and production.”

“The song is about anxiety and where I was,” Jessie admitted. “I used to write about myself in the past and how I used to feel crippling anxiety. When you’re that anxious, you can’t breathe. I was holding myself back. So, I kept myself in this safe space, where I was in my own head, and I didn’t open up to people, I stayed in my bubble because I was comfortable.

“Pray” is Jessie’s response to herself, giving herself a conscious warning to herself.

“I’m basically saying, ‘Be careful what you wish for,'” she said. “Everything may look nice and pretty from the outside, but be careful if you come near me.”

The final track, “Stages,” brings a log-style composition where listeners hear Jessie examine a propensity for inward withdrawal. She reflects on her tendency to get herself into tough situations with guys, admitting she’s powerless in the cycle.

“If the energy changes or something goes wrong, I’ll leave. I’m just being honest,” the artist explained.

With her career steadily climbing to the top, Jessie Berg is optimistic about the impact of her music in the years to come.

“When you hear my music, I want you to think, ‘That was definitely Jesse,'” the artist shared. “It’s important to me to create a sound and a mood for me. At the same time, I want to be a voice to make you feel.”

© 2015 MusicTimes.com All rights reserved. Do not reproduce without permission.