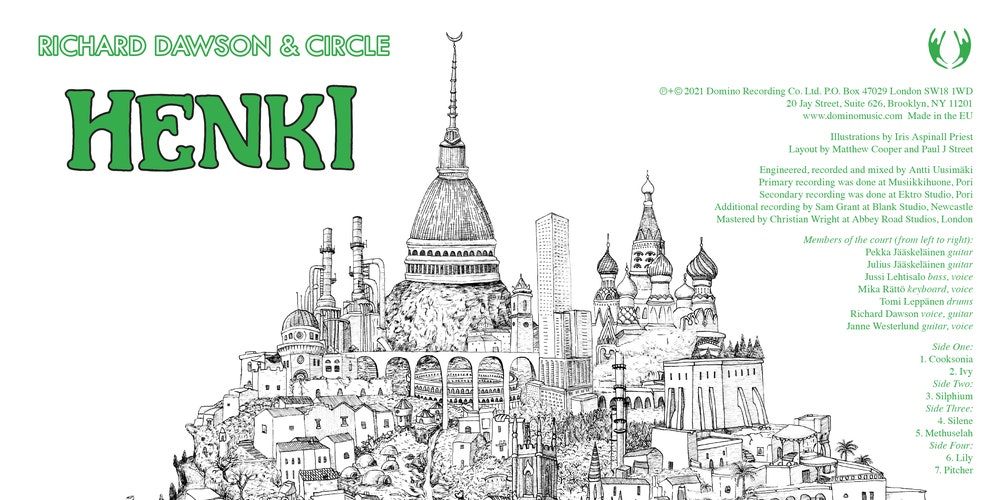 No one writes about humanity – our hopes and dreams, our obsessions and follies – quite like Richard Dawson. Singer and guitarist from Newcastle upon Tyne in the north of England, Dawson works freely in the folk tradition, although this is only just beginning to explain the scale and eccentricity of his songs. Wait a minute, you might find him singing the story of an alcoholic mishap on a school trip; the next, venturing into the early medieval kingdom of Bryneich, or singing about the lives of poor souls packing packages in an online retail warehouse. Really, all human life is here.

Dawson used to push the boundaries of his work and his new album Henki is no different. At first glance, you might think these aren’t people at all: each of its seven pieces is named after a plant. Of course, that’s not the whole story. The album is a collaboration with Finnish band Circle, and the title is a Finnish word – Circle’s Jussi Lehtisalo says it translates to something like “spirit” or “ghost”, while acknowledging that its true meaning is difficult to pin down.

Circle and Dawson did Henki with fits and starts. They initially shared demos remotely, then met for in-person recording sessions in Pori on the Finnish coast, before finally completing the album remotely as Europe went into lockdown at the spring 2020. This prolonged gestation seems to have played in his favor. From its botanical theme, something magnificent takes shape: a series of stories that deal with ancient history and deep time, addressing themes of human labor, tragedy and the mysteries of the afterlife. .

Dawson sings in a bold and shameless howl that sometimes rushes unexpectedly into the upper octaves. Equally distinctive is his guitar playing: resonant chords without gnarled dexterity. But where he really excels is as a storyteller, and Henki has some particularly flowery examples of the form. “Silene” is the true story of a 32,000-year-old seed buried by a squirrel, then plucked from permafrost by Russian scientists, and finally germinated in a laboratory. “Ivy” tells the myth of the Greek god Dionysus, who bestowed on King Midas his powers of creating gold.

Songs often lean on the exhibit – “Unfortunately the fungal cultures we brought with us / started to degrade,” Dawson sings on “Cooksonia”. But as the words fall from his lips, they take on the quality of parables, their dense narratives encouraging the listener to hunt within them in search of deeper meanings.

With some 40 albums in their career now, Circle’s take on various rock subgenres — prog, hard, glam, space, kraut — is performed with virtuoso technicality and camp extravaganza, in equal parts Neu! and Judas Priest. Obviously, they give Dawson’s songs a sense of speed and scale. “Methusalem” runs in a charge of powerful metal, with rippling synthesizers and shattering thunder. Within minutes of the start of “Ivy,” the guitars and drums lock into a driving impulse, and the song only grows bigger from there, fueled by a sense of supernatural propulsion. But Circle’s musicality is also manifested in a more textual way. The 12-minute “Silphium” is adorned with decorative piano and elegant synths, and midway descends into an extended jazz-rock segment before dusting off for a triumphant final cover.

Death is everywhere Henki, sometimes tragicomic. “Methuselah” is the story of a man who goes in search of one of the oldest trees in the world, himself named after a supernatural biblical patriarch; the joke is that he can only prove he found it by cutting it off. Other times, death seems mysterious and unknowable: in “Lily” a nurse at Newcastle Hospital recalls the paranormal events that followed the deaths of those she cared for. “Black lights / Blooming in the doorway / Petals unfold around me,” Dawson muses, and Circle amplifies the strangeness with a weird opera chorus.

In a catalog already noted for strangeness, Henki could be Richard Dawson’s strangest album to date. But his ideas are enriched by the particular twists and turns of these songs; the more Dawson and Circle delve into their eccentricities, the more their music resonates. Whatever Dawson writes, he really writes about people – the way we choose to live our lives and the weird and horrible things that happen to us along the way. Henki explodes these themes on the big screen, unfolding across continents, centuries and even the afterlife. It is deep, although the true meaning of his songs – theirs Henki, if you want, slide between your fingers like air.

Catch up with every Saturday with 10 of our top rated albums of the week. Sign up for the 10 to Hear newsletter here.

2021-11-26
Previous Post: TV stars Jasmin Bhasin and Mohsin Khan have teamed up as a married couple in new clip
Next Post: “A Winter Carol” by Grace-Evangeline Mason: the exclusive score of the 2021 Christmas Carol from BBC Music Magazine