In the summer of 2021, Jonathan Derda from MoFi Distribution emailed me about South Korean brand HiFi Rose. “This brand seems to me to be the spiritual successor to the originals SlimDevicesTransporter and Squeezebox Touch,” he wrote. “We’re all really excited about this.”

I bought a Squeezebox Slim Devices connected to Wi-Fi in early 2006, to experiment with streaming. When Slim Devices released the High Performance Transporter, I was impressed enough to purchase the review sample after measuring it for the Wes Phillips review in the February 2007 issue. I have used the Transporter for a while. several years, but after Logitech, which bought Slim Devices in late 2006, stopped supporting Squeezebox devices, I put it aside. By this time, I had started using the Pure Music and Audirvana streaming apps, which I preferred over the SlimServer software from Slim Devices (footnote 1). But every few months I fire up the Transporter, stream audio to it over my network, and spend a nostalgic evening enjoying what it does.

The RS250
Priced at $ 2,495, it’s a relatively small device, its front panel dominated by a large, four-color touchscreen nearly 9 “wide. To the right of the screen is the sleep button, a volume control knob and a 3.5mm headphone jack. on the other hand, the rear panel is cluttered, by a pair of unbalanced analog inputs and several digital inputs: coaxial and TosLink S / PDIF; USB Type B to connect to the USB output of a PC or similar; USB 3.0 Type A to connect to a storage device and an Ethernet network port The RS250 has a pair of unbalanced analog outputs and three digital audio outputs: coaxial and optical S / PDIF and USB Type A. Video output, with resolution up to 3840 × 2160 @ 60Hz, is available through an HDMI 2.0 port. Mains power connects to an IEC 15A outlet. In addition to these wired connections, the RS250 makes Airplay, DLNA, Roon, Spotify Connect, Tidal, Qobuz and more very good streaming services.

Internally, two 64-bit ARM Cortex processors, a dual-core Cortex-A72 and a quad-core Cortex-A53 with 4GB of RAM, run the Android 7.1 operating system. The power supply is linear rather than switching and has a configuration intended to minimize electrical noise. The analog output stage features the relatively new ESS ES9038Q2M two-channel DAC chip, which is described as a “femto clock”. Internal SSD data storage is an optional extra; this was not adjusted to the exam sample.

This screen is what makes the RS250 both remarkable and useful. When the device is first turned on, it prompts you to enter your time zone, country, and preferred language. After that, a horizontal flow of icons is displayed. There are so many icons that you have to scroll left or right to see them all. Are some self-explanatory? Music, video, Qobuz, tide, clock, settings, input-output settings? while others are enigmatic: Bugs, RoseFM, RosePodcast, RoseRadio, RoseStore, RoseTube, CD Play and CD Ripping. (The RS250 does not have a CD player.)

Tapping the Settings icon allows you to adjust items such as screen brightness, clock display format, appearance of VU meters that appear when playing music and rearrange the order of icons. You can also check the operating system version and IP address, connect to a Wi-Fi network, and watch a video tutorial. An input-output setting icon allows you to choose an external, digital, or analog input, set the input to Internal, where it defaults to the network input, and choose a digital or analog output. When you select the analog outputs, a cogwheel icon appears and allows you to choose one of the seven FIR interpolation reconstruction filters (see “Measurements” sidebar); select variable output level or one of eight fixed output levels ranging from 100 mV to 2.2 V; resample incoming digital data (choices are 44.1 kHz to 192 kHz) or not; reverse polarity; and apply the correction for the lower 8 bits with 32-bit audio sources.

Configuration and use
When I first turned on the RS250 and connected it to my network via Ethernet, it assigned itself an IP address and then told me it needed to update its operating system. It did, and the front panel display identified the system as “3.8.13” and the audio firmware version as “XMOS 3115”. I then set the time, my language and my country.

Roon recognized the HiFi Rose connected to the network as an endpoint; I also connected the RS250’s USB Type B input port to the USB Type A port on the back of my Roon Nucleus +. When I selected the USB input with the RS250 I / O setting icon, Roon recognized it as an ALSA device. For CD playback, I connected the optical output of an N31 MBL drive to the TosLink input of the RS250 with a 1m long AudioQuest OptiLink 5 cable. I learned that the animated level meters on the RS250 front panel do not work with S / PDIF and USB connection, and the file metadata does not display with USB data as it does with the network connection or with playback from an external memory device. 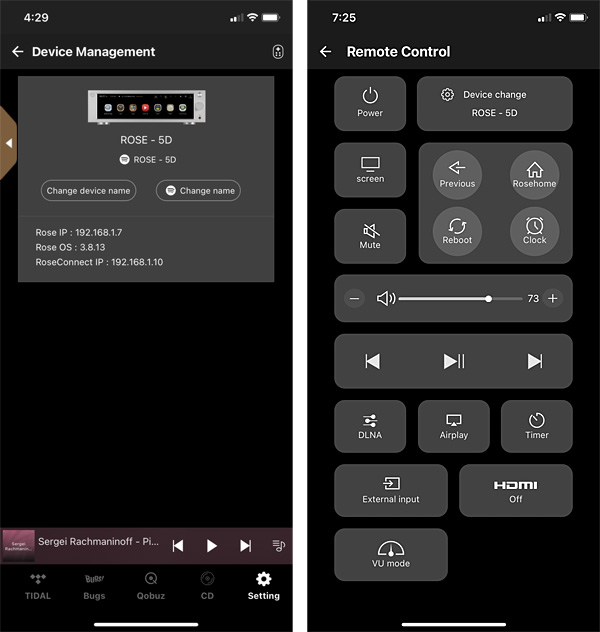 I mainly used the unbalanced analog outputs of the RS250 connected directly to the Parasound monoblocks, these in turn connected first to the PSB Synchrony T600 speakers that I tested in November, then to the GoldenEar BRX. Playback volume can be adjusted with Roon’s level control (network and USB) or with the front panel button or the connected Bluetooth remote control (analog and S / PDIF inputs and local media). Most of the time, however, I used the RoseConnect Premium app (v3.04.27) from the comfort of my listening chair. This app requires iOS 13.0 or later, and my old iPad Mini is running iOS 12.5.4. So I installed RoseConnect Premium on my iPhone 11, which was running iOS 14.8. The RS250 has been identified as “ROSE 5-D”. I used the app to log into my Qobuz and Tidal accounts, and the Tidal and Qobuz albums that I had previously added to my Roon library appeared in the Tidal and Qobuz album windows, both in the application and on the RS250 front panel display.

Some audio settings, I learned, are only available through the input-output adjustment icon on the front panel display and then the previously mentioned cogwheel icon. Based on my experience with the reconstruction filter settings with other D / A processors that use Saber ESS DAC chips (footnote 2), I selected the “Corriged minimum phase Fast Roll” filter. off ”(see box“ Measurements ”) and set the RS250 to play files at the original sample rates rather than oversampling them. I don’t have 32-bit audio files, so I left the “Below-8-bit correction for 32-bit sound source” feature turned off. 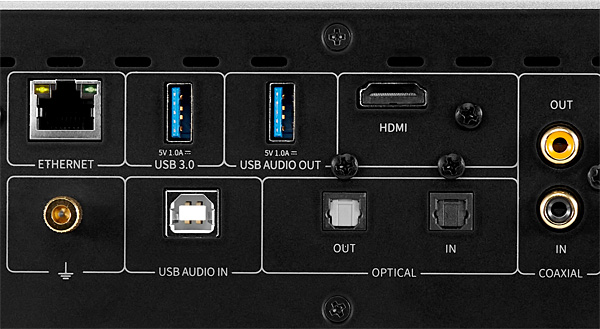 A menu item allows the RS250 to access a music library stored on a NAS network drive. However, since my NAS is currently offline, I plugged a 16 GB USB stick containing reference recordings into the USB 3.0 “In” port on the rear panel of the RS250. The RS250 recognized the storage device and asked if I wanted to analyze the content and create a database. Once done, after a while, the albums appeared in the Music window of the app and the front panel. There was also an MPEG video file on the USB stick, and I could play it with the RS250, with the video image showing up on the front panel display. Selecting RoseTube with the app or display brought up a selection of music videos on YouTube. Likewise, selecting Radio and (in response to a prompt) selecting “USA” as my country brought up a list of Internet radio stations.

Footnote 1: Now called Logitech Media Server, this open source application is always regularly updated. It can be used with servers like the Antipodes K50 which Jason Victor Serinus reviewed in the November 2021 issue.

Footnote 2: See for example the discussion of filters in my review of the Okto dac8 Stereo.