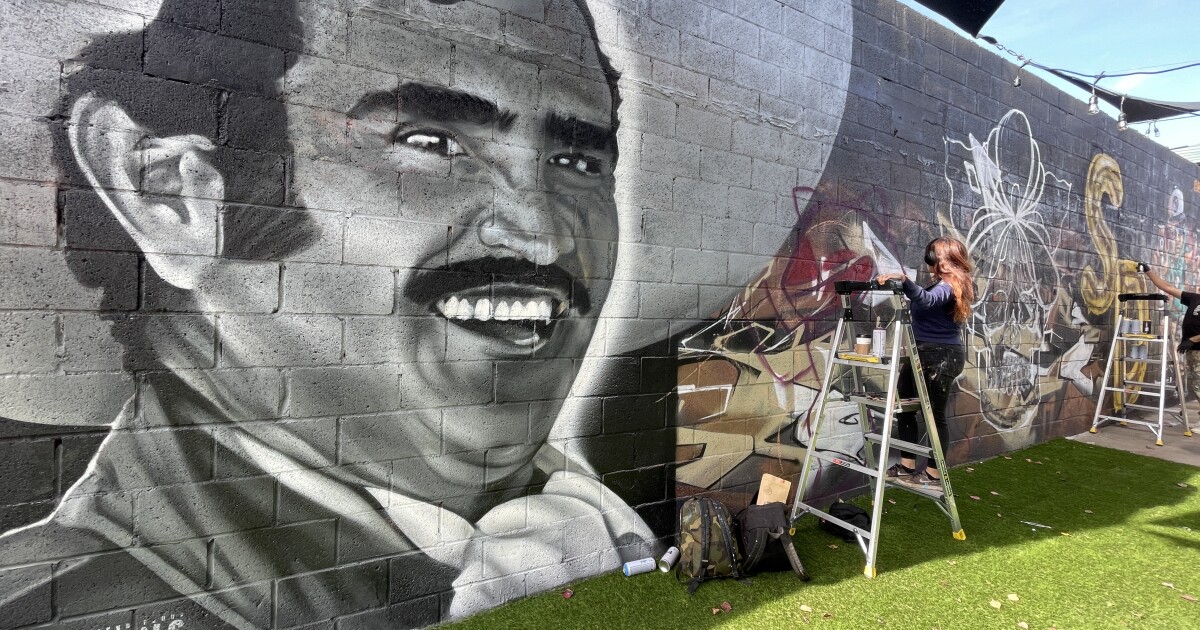 Artists on both sides of the border recently paid homage to Vicente Fernández by painting murals that commemorate the legacy of the late Mexican singer.

In San Diego, the couple behind Ground Floor Murals painted a portrait of “Chente” on the wall of a designer collective in the Sherman Heights neighborhood, while south of the border Tijuana artist Gerardo ” Fashion »Orozco chose the exterior of a house.

Fernández was one of the most important figures in Mexican culture, whose music crossed borders and evokes countless memories. He died on December 12 at the age of 81 in Guadalajara, Mexico. He was known as the king of ranchera music.

“When I think of Vicente Fernández, I automatically think of my grandmother and being around carne asada with all my family. Like I can almost feel it when I hear Vicente’s songs, ”said Paul Jiménez, who formed Ground Floor Murals with artist Signe Ditona.

The couple had wanted to paint a mural of Fernández for over a year, and upon hearing the news of his death, they grabbed their sprays and got to work.

Since plans for a mural were already in place for the recently inaugurated designer collective Imperial Ave Co-Lab in Sherman Heights, they opted for a 12-foot-tall portrait of a young Fernández.

“It’s a commemorative coin. It’s supposed to pay homage to him, ”said Ditona, who added that it took four hours to complete the mural.

Jiménez said he had a strong connection to Fernandez’s music, which is why he always knew he would paint it someday.

“For me, growing up, I honestly felt like part of my family. He felt like my second grandfather, because my grandma has such a crush on him. So growing up he was just huge for me, ”he said.

Plus, the couple remembered all the parties with friends where they couldn’t help but sing songs like “Volver, Volver” at the top of their lungs.

Milo Lorenzana, co-owner of Imperial Ave Co-Lab, said he expects the mural to be on display for a long time.

“It would be difficult to cover something like that,” he said. “So come take your pictures, have a cup of coffee or hang out. We don’t see this happening anytime soon.

Ground Floor Murals is the company behind a series of San Diego Padres murals that have been painted in locations across San Diego County. He also painted pictures of boxers Canelo Alvarez and Manny Pacquiao at the House of Boxing gym.

South of the border, Orozco, the artist from Tijuana, recently worked against the clock to complete a mural in honor of “Chente” before the rain hit the area.

Orozco knew he wanted to pay homage to Fernández through his art as soon as he learned of his death. It took him nine hours to complete.

The spray mural depicting Fernández’s photo from his album “Para Siempre” was painted on the wall of a house in the Colonia Buena Vista neighborhood and can be seen from the Vía Rápida highway.

While he was working on the mural, fans expressed their support by honking their car or shouting “Viva Chente!” Orozco said. “It’s a fresco for the community and for every Mexican who identifies with their songs,” he said.

The mayor of Tijuana, Montserrat Caballero, praised Orozco’s work. “I admire your work so much, Fashion! What a pleasure to have you like this representing icons of our culture, ”she wrote on Orozco’s Facebook page.

Orozco dedicated the fresco to his grandmother and aunts, who grew up with the music of Fernández, and to all those who loved the Mexican idol.

2021-12-27
Previous Post: Well, I admit: the books are heavy. E-readers have their advantages
Next Post: Andrew Dansby’s rock and jazz albums in 2021