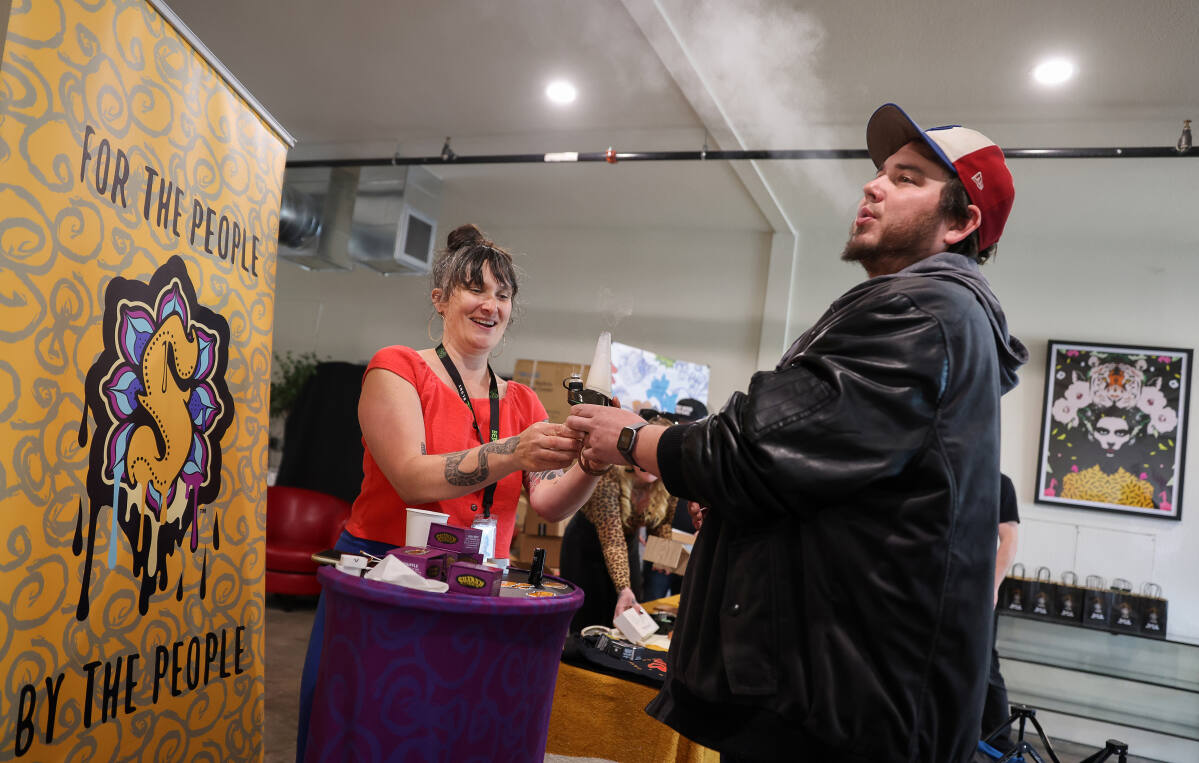 Hours before opening time at the Jane Dispensary, cannabis enthusiasts eagerly gathered in a line that wrapped around the building to celebrate the cannabis culture holiday: 4/20.

The dispensary extravaganza ran from 10 a.m. to 7 p.m. and featured games, food, and more than 30 vendors selling cannabis products — some in the form of gum, salsa, tonics, and extracts. .

The dispensary buzzed as local artists DJ Tecni and DJ Armin played old school house music and hip-hop as clouds of smoke filled the air. On one wall, attendees used colored chalk to draw marijuana leaves and messages that read “Be nice, be mean—, be Jane” and “420 Baby!”

In a corner of the dispensary, a representative of products from Shaman Extracts, a local vendor, pointed out the healing properties of cannabis.

“It’s amazing to be here today,” said Drea Silvestri, a product representative who presented samples of cannabis extracts to attendees. “We can celebrate this magical medicine and educate people about it.”

In 1996, California became the first state to legalize medical marijuana when voters passed the Compassionate Use Act, according to the state’s Department of Cannabis Control. In November 2016 recreational use in California became legal.

“People are so drawn to socializing around cannabis because it’s been stigmatized for a hundred years. Having people come together to celebrate this brings me so much joy,” said Leigh Anne Baker, COO of the dispensary. “It means that the point of view changes for a lot of people.”

The origins of the nickname “420” began with a group at San Rafael High School who called themselves the “Waldos”. One day in the fall of 1971, at 4:20 p.m., the group gathered in front of a school statue, smoked a joint and went in search of a patch of weeds growing in the woods, reported the Associated Press.

The rest is history.

Jane Dispensary, officially launched in September 2021, after facing several delays due to the spread of COVID-19.

Another location is expected to open in Cotati this fall, Baker said.

One attendee who drove in from Oregon to sample and purchase products at the dispensary was amazed that cannabis had gone from “criminal to medicinal.”

“Cannabis brings people together,” said Catherine Klunk, who wore shimmering purple eye shadow. “No matter what your status, you pull out a joint and everyone is equal.”

You can reach editor Mya Constantino at [email protected] @searchingformya on Twitter.