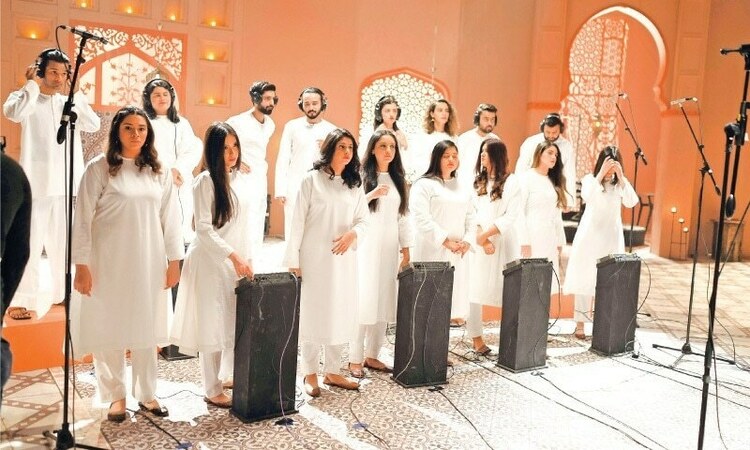 There were no live performances on stage. No electronic spins on nostalgic hits. No weekly episodes offering a selection of several songs. Not even a sponsor-inspired red and black theme in the videos.

Fourteen years strong, Coke Studio (CS) decided he needed to do a 180 degree turn and restart completely. Just in time too.

Or maybe not quite on time. The single shot CS the format had started to become obsolete a few years ago. The annual seasons had become repetitive, and although a song or two eventually became a hit, many others were quickly forgotten.

In his early years, CS had been a sight that Pakistan had owned with great pride. The songs blared from car radios and at events, became the focal point of multiple discussions on Twitter and did their duty well in promoting Pakistan’s sweet image, still in need of promotion, to the world.

Under its new curator and producer Xulfi, Coke Studio was truly transformed this year, ditching its old format and baggage and bringing in new sounds and visuals that felt like a breath of fresh air. It was time…

Lately, however, it was running the risk of becoming just another annual musical spectacle. The conversation each song would previously inspire had dwindled and while different producers tested their mettle with a range of formats, nothing quite worked.

That is, until the show is turned upside down this year, mixed with color and a lively mix of electronic beats, mixing veterans and young music talents, each song telling a completely different story. Perhaps the criticisms directed at the show finally succeeded in bringing about this metamorphic change. Maybe the sponsors finally realized it was time to turn things around before the show died out altogether. Basically, it was just time.

‘You jhoom, jhoom, jhoom, jhoom…’ chanted the iconic voices of Abida Parveen and Naseebo Lal and the audience swayed in unison. Overnight it became an anthem for the broken hearted, the thinkers, the struggling in life; everyone. Eureka, CS was back like never before.

‘Kana yaari, gadaari, ishq nama gar ada,’ sang Balochi singer Wahab Ali Bugti along with cheerful Kaifi Khalil and Eva B, in the next single to be released. The Baloch words weren’t understood by many, but the mix of rhythm and innate lyricism of the traditional dialect held you hostage. It had you tapping your feet, humming unfamiliar words and, while it was in stark contrast to the spiritual awakening inspired by ‘Tu Jhoom’, you listened to that song too, over and over again.

You have also seen the videos again and again. CS’ An ingenious new curator and producer – though his name is certainly not new to the Pakistani music scene – Zulfiqar Jabbar Khan, aka Xulfi, has always believed that visuals and sound should be fused together to form a powerful narrative.

While conversing with me, he observes, “If a whole list of songs is viewed in one space, people cannot associate new stories with each song. When a background is created for each song, and then you post that song and give people the opportunity to absorb it, connect with it, and attach to it, it can elicit a powerful response.

This was just one of the changes Xulfi calculated to bring CS transformation. Instead of a weekly episode featuring three or four songs, only one song was released at a time. The motley crew of around thirty songs featured in previous seasons has been replaced by thirteen singles.

As mentioned earlier, the scene inspired by red and black soft drinks was gone. Instead, specially designed sets broke the monotony, a different one for each song, and the songs were filmed as music videos, not live performances. Art directors, costume designers, associate producers, musicians and, ultimately, the sponsor funding it all, came together to form Xulfi’s carefully curated musical army.

“Each song was the product of a unified effort by different creative minds, working together,” Xulfi explains. “As a curator and producer, I set a certain vision and then we all connected to make every song count and tell a different story.”

Each song was the product of a unified effort by different creative minds, working together,” says Xulfi. “As a curator and producer, I set a certain vision and then we all connected to make every song count and tell a different story.”

It is undeniable that each CS14 song stands out on its own, although the audience will always have their favorites. ‘Tu Jhoom’ serves as the perfect kickoff. It’s followed by the upbeat “Kana Yaari” who, Xulfi confirms, was uniquely positioned to come in second, surprising people with its complete disparity from the first version.

‘Ye Dunya’, featuring Karakoram and Talha Anjum and Faris Shafi, arranges rap, rock, bilingual lyrics and flashing lights together, forging a trajectory of its own and offering just a glimmer of the past. CS Songs. The groovy and catchy ‘Thagyan’ by Quratulain Balouch and Zain Zohaib also recalls CS tubes of yesteryear.

Momina Mustehsan walks in a sort of magical garden in her solo “Beparwah”. The song may not have made a big splash simply because it leans into conventional musical territory, but Momina sings it beautifully. ‘Neeray Neeray Vas’ by Soch The Band and the Butt Brothers is less gripping, though the video does its best to keep you hooked.

There were Atif Aslam’s numbers – always particularly watched due to Atif’s huge fan base and influence. The sweet ‘Sajan Das Na’, with Atif collaborating with Momina Mustehsan, follows the beaten path and may not be everyone’s favorite to start with. With its unusual ups and downs, however, it tends to grow on you. ‘Go’, on the other hand, featuring veteran Atif with one of today’s brightest young stars, Abdullah Siddiqui, experiments and introduces new sounds, new ideas and keeps you completely transfixed.

Ali Sethi and Shae Gill’s beautiful “Pasoorri” was another all-around hit, delivering a visual and audio experience that kept the song playing on repeat. For Ali Sethi, it was a move from classical music to more avant-garde and modern territory. It also propelled the young and up-and-coming Shae Gill straight into the spotlight, making her an overnight musical favorite and bringing in corporate sponsorships and gig offers – much needed for the bread and butter of a musician – in his own way.

“Pasoorri” continues to top the charts not only in Pakistan but also internationally, even ranking number three on Spotify’s Global Viral 50 list. There is the soft image that swells, once again.

Concluding the season was old CS producer, former leader of The Strings and one of the country’s oldest musical artists, Faisal Kapadia, collaborating with young rap group Young Stunners in ‘Phir Milenge’. The composition made the most of Faisal’s familiar timbre and left you wanting to hear more. The inclusion of Young Stunners added a certain element of freshness to the song.

The video itself was mesmerizing, with a single camera zigzagging through the halls, light and shadows changing as the song continued, entering a room where violinists played a few chords in unison before the song does not continue. Magnificent.

In fact, the same can be said about the visual presentation of CS14 as to the music itself; from ‘Pasoorri’ where Sheema Kirmani struck a ballet dance pose, to the neon lights that flashed in unison with the rhythms of ‘Peechhay Hutt’, the colorful doors of ‘Kanna Yari’, to the camera sweeping the backdrop in ‘ Go’ to the dancers jhoom-ing to ‘Tu Jhoom’ by Abida Parveen and Naseebo Lal.

“The visuals absolutely had to be expressive,” Xulfi tells me. “The feel had to be cinematic and unique. When we were recording “Tu Jhoom”, we lit scented candles all over the set, to keep the mood of the song alive. It was important that every little aspect merge.

He continues: “The final take of ‘Tu Jhoom’ is the one that we finally put into the video. I showed Abida ji a video from her youth, where she was singing and smiling and I said to her: “Please bring this energy, this smile to this song”.

“The end result was beautiful and people immediately opened their hearts to it. I have to admit, though, that I got too attached to this song. I had invented the concept of ‘Tu Jhoom’ at a time when I was feeling particularly depressed. I kept humming the lyrics to the title track to myself. I used to write down my personal observations on life and I took the list to Adnan Dhool and asked him to construct the lyrics of the song from them. He added his own learnings and shows of lyrical genius in the final song. The song ended up being very personal to me. It was only after its release that I realized that I had to break away from these songs.

“I had spent months of my life locked in a single room working on the songs, but now that they were going to be released they had to belong to the public and not just to me and my team. that when the public appropriates a song that it becomes eternal.

Xulfi continues: “In the very first presentation I made at the CS representatives, at the time when they saw me as a potential commissioner and producer, I said from the beginning: “I accept who I am and I accept who you are”. I always knew that while the show might stem from my vision, it could only be a success if it was led by the unified efforts of different creative minds.

Has he also decided not to feature any covers in the new season, a first for the series, which has always counted its covers of classic hits among its most popular numbers? “Covers are great because they introduce the musical sensibilities of the past era to the new generation,” says Xulfi, “but if we’re focused on creating nostalgia, when will we bring new stories and new ideas to the first plan ?”

But not all new ideas have the power to cause a sensation. Credit must be given again and again to Xulfi’s musical prowess for taking on the country’s most famous musical output as it quickly faded into obscurity, rejuvenated it and propelled it straight into the limelight. “Real magic,” says the show’s tagline – and it is.

Is Xulfi afraid of not being able to ward off the same magic next season? “I’m going to start from nothing like I did this time,” he said. “I’m going to focus on the process of creating the songs rather than focusing on their success. And it will happen.

2022-04-25
Previous Post: CTV Northern Ontario: The arts and music festival unveils half of its programming
Next Post: Apple Music and App Store are currently facing downtime for some